1,845 out of school children have been enrolled into primary, junior and senior secondary schools in Monguno Town on the first day of grassroots sensitization and mobilization advocacy being carried out by the state high-powered committee on education set up and last year by Governor Babagana Umara Zulum.

The governor had in its effort to accelerate school enrollment especially in northern Borno, where there is high number of out of school children, inaugurated a Committee with the mandate to go round the state and sensitize parents to enroll their wards in schools.

After its inauguration the committee began work  started in Monguno town of the Northern part of Borno state the committee had started the its activities with a stakeholders meeting where the Chairman of the committee Prof. Isa Hussain Marte who is also the Chief of Staff to the Governor, (Co’s) briefed the stakeholders on their mission and thereafter engaged in fruitful interactive discussions with them.

On Saturday, before commencing the enrollment process, the committee inspected some of the existing primary, junior and senior secondary schools in the town to ascertain the true condition of all the exiting facilities in the town.

At the Monguno Central  primary school which is the venue of enrollment programme Prof. Marte addressed parents and pupils who turned out enmass and thank the Local stakeholders for mobilizing the people despite the short notice.

Prof. Marte assured stakeholders and parents that government would provide all the incentives required to keep the pupils in school. 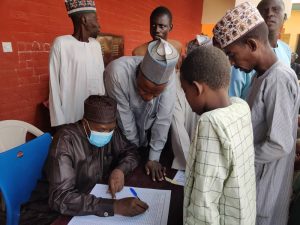 The Chairman of Monguno local government council, Alhaji Kyari Ibrahim, commended the initiative and foresight of the governor for initiating the exercise and thanked members of the committee for their sacrifices to visit Monguno Town which is considered one of the hard to reach and strongholds of Boko Haram insurgents

An elder resident of Monguno town, Alhaji Kalla Maina, who is also APC State Deputy Chairman thanked Gov. Zulum  for his initiative and foresight towards reviving the educational sector of the state while calling on the people to support the Governor and pray for him.

The District Head of Bida, Alhaji Zannah Kaumi Mustapha  also commended Gov. Zulum his visionary leadership and called on him construct more schools in the town.

Alhaji Mustapha Gambo, Chairman School Base  Management Committee of Central Primary School who is also the PTA Chairman of Monguno local government area commended Gov. Zulum for reopening schools in the town after 3 years of closure and called on the governor to  provide them with school buses to ease transportation problem and also motivate the  pupils and students.

In their separate remarks, Bako Alhaji Yusuf and Kachallah Alhaji Bukar who both brought their children for enrollment, prayed  and thanked Gov. Zulum and members of the committee for providing them with the opportunity to educate their children free of charge.

The State Advisor on Better Education Service Delivery for All (BESDA), Alhaji Abba Kura Mariu commended the parents for coming out massively to enrolling their wards and assured them that the government under the BESDA programme is poised to reduce out of school children and improve literacy and numeracy in the state.

Also, the committee had an interactive session with retired teachers in the local government with the view engaging some of them

The committee had after concluding their  for the day visited the Commander of Sector 3, Operation Lafiya Dole Maj. Gen. S.I Igbinomwanhia to create synergy and collaboration between the military and the committee to ensure success of the programme. In his part, the Commander appreciated the members of the Committee for their visit and assured them the Army is going to work and cooperate with local government and committee to ensure success of the programme.