It was a colourful event during the pulling out parade in honour of the former Chief of Army Staff, Lt-Gen. Turkur Buratai in Abuja on Friday, January 29, 2021.

Besides Buratai being an indigene of Biu, in Borno, Zulum had worked closely with the former army chief in the ongoing fight against Boko Haram.

The colourful pulling out held at Mogadishu Cantonment in Asokoro, the FCT. The parade is a military tradition organized to honour retiring military chiefs. Activities marking the event include match past by soldiers with outgoing chiefs receiving valedictory salutes.

At Buratai’s pulling out, a book “Legend of Buratai” written by the former Chief of Army Staff was  launched by the minister of Defence, General Bashir Magashi (retd). 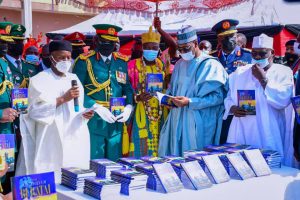 Buratai who served as Chief of Army Staff from 2015 to January 2021, was retired on Tuesday Januaryn26, 2021 by  President Muhammadu Buhari.