Nigeria is on the path to a win-win situation.

For the first time in a while, the general election is not going to be a choice between candidates without records of building anything of value, but amongst candidates with track records of capability and private success. 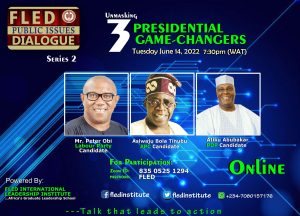 The ruling APC has presented Asiwaju Bola Tinubu, a man who is a successful professional, who has vast experience in private sector with multinational corporations, as well as several business interest. Long before ever coming into politics, he was a funder, who provides funding to politicians seeking offices. He eventually joined politics and he became a senator. He led the struggle for democracy after the annulment of June 12 and he eventually became a governor. His successful records of business development, human development and organizational development is unrivaled. What he built as Lagos State Governor more than 20 years ago is still standing.

If he makes it to be president, this cannot be a bad choice for the country. He came in with his successful record in business, nation building and political success.

Like every human, he has his short comings, which is also public records, but in all, his emergence can not be regarded, by any standard, as a bad choice for Nigeria.

Atiku’s record of business success is a public knowledge. The aggregation of his businesses, accounts for one of the highest private employment in the country.

Despite being a typical politician, his ability to build is not in doubt. Although, he has his short comings, which is in public domain, especially the perceived record of corruption, particularly his role in privatization during obj tenure without any result, but not withstanding, we cannot deny the fact that at a time that Nigeria needs builders, Atiku’s record as a successful builder of businesses cannot be disregarded.

Although, Obi doesn’t stand a chance, being in a party without any structure, but he has a record of business success. As a governor in Anambra, he did considerably well and has not been accused of corruption. His emergence in the race would also not be a bad idea for the country.

We also have the likes of:

In all, 2023 will be the period of change in Nigeria. The options are not so dark like some people want us to believe.

Actually, those in the race are some of the people that have demonstrated their capacity, both in private and public sector and we should engage them positively to get the best from them, instead of being fixated on the negative. 2023 is going to be a win win situation for Nigeria.

The die is cast. Political Parties are rounding off their Presidential Primaries.

This is unprecedented in our current democratic dispensation.

FLED International Leadership Institute sets the stage to examine their background, what they have done and what they bring to the table for benefit of Nigeria and Nigerians.

Keep the Date. Join the conversation.

PID … Talk that leads to Action.