The main road running from Ganaja Village area  through to 500 units housing estate in Lokoja, Kogi State, has  broken down completely.

The area suffered from a devastating flood which lasted from September to late October 2020, is now under deplorable conditions. The asphalt layer has been damaged, deep gullies and holes have emerged on the road. The damage on the road is made worse by Dangote truck drivers who are simply don’t care about the condition of the road. 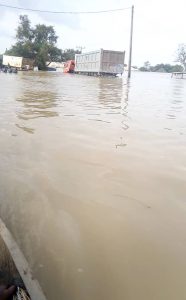 It was stated that the road was already in bad shape before the flood started, but has now worsened after the flood. presently, road users and travelers struggle to ply the road daily, and they are trapped in the smelly dust that fills the air when passing the area. The residents in the area complained lack of government intervention on the road. in the meantime, some individuals that try to fill up the holes by themselves .