The Borno State Governor  Professor Babagana Umara  Zulum of Borno State, has asserted that eastern education has experienced negligence by past governments leading to the deterioration of Tsaggaya education in the north especially, Borno state where for over 1000 years, Quranic Education had been in existence.

The Governor stated this Wednesday while inaugurating a 14-member Committee on Tsangaya Education System in the state  with specific terms of reference to carry out Reformation processes of upgrading the standard and quality of Tsaggaya education and to advise the state government appropriately.

Zulum noted that the Tsaggaya education system reform committee  was deliberately constituted  to further promote and  enhance  the Tsangaya Education System Curricular at both the primary and secondary levels  to improve on the present situation while assuring complete support of the State Government  towards improving Environmental,  socio-economic and study conditions of the Tsnagaya schools with a view  to curtail  street begging of Almajiris which is becoming a nuisance.

The governor reminded the people that it is compulsory for every Muslim to seek for knowledge, which is in line with the norms and values of Islamic teaching, which is why Muslims scholars  seek knowledge and learn Quran in whatever form, particularly Tsangaya Education.

Zulum recalled that successive Empires in some West African countries like  Mali, Borno, and Songhai among others that have  renowned Islamic scholars and clerics teaching the religion of Islam.

The Committee which is expected to submits its report in 30 days  is charged with the following terms of reference: 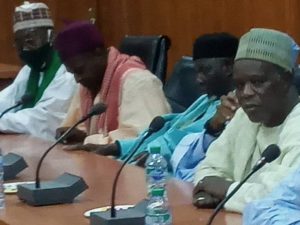 According to Governor Zulum, the action of the state government was part of his administration 10- point agenda, and pledged to continue to work with the Committee even after the submission of their report.

He also directed the committee to liaise with the State Ministry of Education in the discharge of it’s responsibilities while stressing that the selection of membership of the was based in their individual integrity and scholarship.

Responding, the Chairman if the Tsangaya Education System Reform Committee , Khalifa Sheikh Aliyu Ahmad Abulfatahi thanked the governor for finding them worthy to serve in the Committee and assured him of their willingness and determination to carry out the onerous task of promoting and uplifting Quranic education and  Islam in the historic Borno empire.

Abulfatahi also commended the governor for his efforts and commitments towards improving the quality and standard of Eastern Education as well as providing conducive study and teaching environment and conditions as well as welfare of both the Tsangaya Schools  teachers, pupils  and students.

He noted it is on record that Quranic education has earned Borno people high respect and dignity which should be maintained and promoted while calling on Governments to give priority to Eastern education towards it’s upliftment and upgrading .

Khalifa Abulfatahi  assured the governor that the Committee members remained resolute and committed to discharge their responsibilities accordingly in the overall  interest of Tsangaya Education System Reform, progress and development of the state as well as humanity at large
End