A number of #EndSARS protesters went half naked at the entrance of the National Assembly on Thursday.

It was the second day of the protest at the National Assembly.

The protesters also chased away Omoyele Sowore, the The Publisher of SaharaReporters, who attempted to join the protest 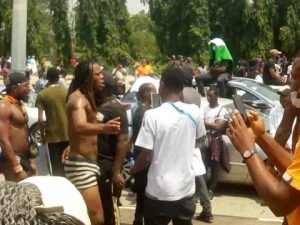 The protesters told Sowore to go away and prevented him from joining the group.

The protesters, in their hundreds, were demanding for the end of the Special Anti-robbery Squad.