No More Promotions Without Exams as Zulum Okay’s Committee Report

Governor Babagana Umara Zulum of Borno State has directed, as recommended by a committee on civil service reform, that Civil servants in Borno state will henceforth sit and past examination before they get promotions 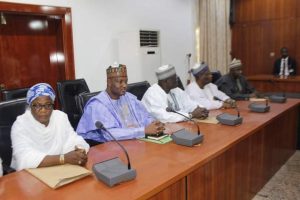 The governor gave the directive when the committee headed by the secretary to the state government, Usman Jidda Shuwa, submitted its report to Zulum on Monday at the Government House.

“Promotions are nowadays done only based one the number of years spent but promotional examination is very critical to capacity building and productivity.

“Therefore the office of the Head of Service is directed to submit requirement that will enable the state Civil Service Commission to conduct promotional examinations effective from the year 2021” Zulum said.

He added, “Some of the Committee’s recommendations require immediate implementation while others are to be implemented on long-term basis.”

“The entire will be deliberated by the state executive council, subsequently a white paper committee will be constituted to work out phase by phase implementation”, he added.