The elegant three-story designed schools were built at Ajilari Cross in Jere, and Abuja-Sheraton in Maisandari ward of Maiduguri metropolitan council, which are low-income communities where many school-aged but out-of-school children reside.

Each of the schools has 30 classrooms that can accommodate between 40 to 50 pupils at the maximum, meaning about 3,000 pupils in 60 classrooms. The schools have been equipped with desks and chairs while pupils already admitted are provided free uniforms.

48 teaching and Non-teaching staff who include the Head-teachers have been engaged to work in the schools.

The schools construction was started and completed by 17 month old Zulum’s administration.

In speech during the commissioning, the Governor said, “Government is handing over the school to the community and the community is expected to run the school through a Committee within the community, while Government will pay teachers salary through the Education Trust Fund on monthly basis by way of grants to the School.

“In addition, Government is determined to maintain and sustain the school in close collaboration with community efforts in ways that will serve generations” 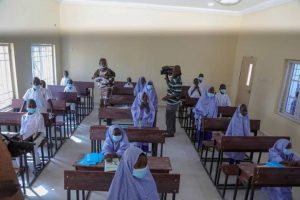 At Ajilari, Zulum ordered the construction of two deep aquifer boreholes to serve community members around the Mega school there.

It should be recalled that Zulum  recently approved the recruitment of over 700 teachers for secondary schools and promised employing hundreds for primary schools when ongoing verification and standardization of teachers is completed.

… Opens new road, to dualize another

In another development, the Governor commissioned a newly constructed road and network of drainage at Moromoro community.

He later announced the dualization of 10km customs-Muna road, a commercial route along Maiduguri-Mafa-Dikwa road. He said the project will be executed at a cost of 5 billion naira, where work is expected to start in the next 15 days.

The dualized road will connect to Borno’s first flyover presently under construction by a Chinese firm around the customs roundabout, which had been congested for many years.
#