…. Disburses Cash Support to 600 Wives of Soldiers in Borno

The Association also empowered 600 barracks wives of officers and soldiers in collaboration with the Borno state government and Bank of Industry (BOU) to boost their trades and make them self-employed.

In her remarks at occasion, the NAOWA 7  Division Chairperson, , Hajiya Halima Ibrahim Khalifa said ” I am pleased to inform you that we are awarding full  scholarships to 10 children of Soldiers who  lost their lives  in the fight against the Boko Haram insurgency”. 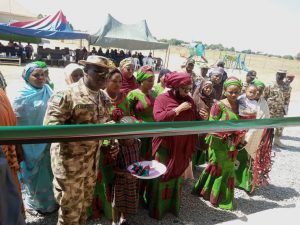 Hajiya Ibrahim informed that the scholarships cover complete tuitions and extra moral fees, books, school bags and students uniforms from their admission year to their graduation from the school.

She said, “We hope subsequent administration of NAOWA leadership will sustain it and continue with the good work and perhaps build upon what we have started.

“We consider them as our children, the sons and daughters of our fallen heroes who have paid the supreme price for the sovereignty of our dear country. May their souls continue to rest in peace”.

According to her, NAOWA, in collaboration with the Borno state government and Bank of Industry, initiated an Empowerment scheme for 600 indigent women in the barrack. Twenty women will benefit in batches to ensure transparency and smooth disbursement. 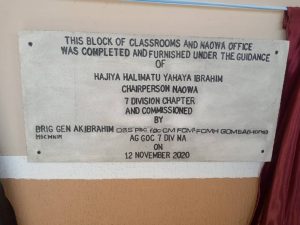 “It is in this regard, that the NAOWA 7 Division chapter in conjunction with the Borno state government and the Bank of Industry secured a startup capital as part of our efforts to empower 600 women in the barracks. Today we will be presenting cheques to the first set of 200 women, while the rest will be given theirs in batches”, Halima added.

She further disclosed that NAOWA Nursery and Primary School has continued to grow since establishment in 2006, starting with few pupils and today has now transformed into primary 4, of 206 pupils, 18 academic staff and 6 supporting staff. 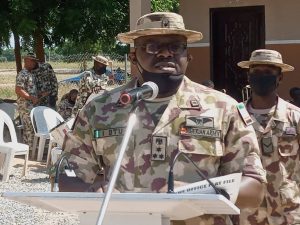 In his  speech, the General Officer Commanding , 7 Division, NA Maiduguri,  Brigadier General  Abdul Ibrahim Khalifa  said, ” today’s occasion  of the commissioning of the block of classrooms is laudable and is a reflection of the  Nigerian Army commitment to education”.

The GOC who was represented by the Chief of Staff,  7 Division,  NA Maiduguri, Brigadier General  Ifeanyi I. Ottu

He commended the NAOWA Chairperson for her efforts and support to the orphans of the fallen heroes who paid their supreme price while on duty serving their fatherland with scholarships, which is part of the NA free education endowment for children of fallen heroes.

The GOC further appreciated NAOWA for its initiative and financial support to the widows and other women in the barracks in conjunction with the Borno state government and bank of industry in giving loan facilities to about 200 women to make them self-reliant.

General Ibrahim assured the people of Borno state and the Northeast in general that the Nigerian Army is more determined to ending Boko Haram insurgency and restore peace back to the region.

Speaking on behalf of the parents of the orphans, Fatima Audu thanked the NAOWA for the gesture and prayed that God should  reward them and continue to guide and protect them.
#

One Woman One Man