Governor Prof. Babagana Umara Zulum of Borno State said his government would not succumb to any threats or sabotage towards the realization of the 25 years development plan and 10 years strategic transformation initiative launched by the state government.

He maintained that that the proposed development plan is an all-inclusive plan with strategic vision, mission, and goal for proper implementation by all the local, national and international stakeholders including the over 132 NGOs operating in the state.

The governor called on investors to invest in the vast abundant resources available for the progress and Development of the state citing other developing countries that were faced with crisis but after a decade or two, they are now transformed and developed. As such, Borno will recover her lost glory and become one of the best states in the country and Africa despite the Insurgency.

“As you have heard, the plan before you today has been preceded by a thorough analysis that tried to evaluate our Strength, Weaknesses, Opportunities and Threats (SWOT). As an old line goes, ‘no winds are favorable until one knows to which port one is sailing.’

“The vision of this plan is to ensure that in the next ten years, that is by 2030, we transform this insurgency ravaged society into a peaceful, stable and self-reliant society with over 70% productive population. In the next 25years that is by 2045, we wish to deliver a secure and prosperous society that is a leading regional agri-business and commercial hub that connects and supplies the markets of Central Africa, to the south, the Nile valley to the east and the North Africa to the North. This will make Borno State to be the great stabilizing power in tropical Africa, a role that the old Borno Empire played for centuries.

“This plan has identified five driving pillars and 4 enabling pillars that are critical in achieve this vision; Human Capital Development, Leadership in Agriculture, Healthy Citizenry, Sustainable Environment and Regional Trade Hub for Commerce that will provide jobs and prosperity to the citizens. These pillars will stand on the strong foundations of Peace and Security; Reconstruction, Rehabilitation and Resettlement; Purposeful infrastructure and above all Accountable Governance.

“Each of these pillars has strategic approaches and plans that will ensure rapid attainment of results that have direct bearing on the lives of our people. Human Capital Development is central to building communities with strong values and orientation that are necessary for not only recovery and development but also setting standards in our affairs.

“This pillar includes quality education for all children with completion of secondary school being the minimal level of education every child should have, social reorientation and the establishment and strengthening vocational and Technical skills across all levels of education including our nascent State University. Our religious and traditional leaders have very important roles to play in social transformation so that our people imbibe our values of hard work and dignity of labor.

“Today Borno is standing on the threshold of history, ready to mobilize all resources to overcome life’s enduring challenges. Our history, like the history of all great civilizations, has been characterized by challenges and victories over these challenges”, Zulum said.

Zulum further reassures his government determination to relocate Marte, Wulgo,  Banki ,Abadam, Guzamala and others remaining at the IDPs back to their ancestral homes between the end of November 2020 and May 2021 as part of the strategic transformation plan of the state government.

“This 25 year development plan is a proof that every dark night must give way to light, and we thank the Governor for this roadmap & emphasis on human capital development, leadership in agriculture & purposeful infrastructure. We have the resources and we have the will to make it happen”, Zulum added.

The Governor also charged every son and daughter of Borno state to be committed to the development plan while calling on the International community including the iNGOs to collaborate with the state government to transform the state. 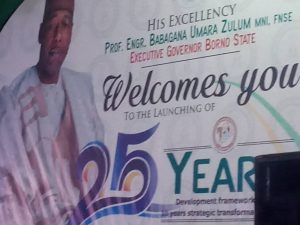 “Finally, I wish to call on ALL the good people of Borno State, our humanitarian and development partners, the business community and the Federal Government to rally round this development and transformation agenda, irrespective of political persuasions, because this is development not politics, this plan represents our future not our past, this is a fundamental responsibility not an option.

“With God’s guidance and your support, I am convinced we will rebuild Borno again and restore the age-old honor, dignity, and prosperity of the state, while ensuring that all citizens and future generations have access to basic necessities to thrive at every stage of their lives”, Zulum said.

The Minister of Communications and Digital Economy , Dr. Isa Ali Fantami  said Borno state actually is endowed with lots of potentials like land mass, Agriculture, trades and mineral resources among others which needed formidable development plan to tap and harness for the benefit of the citizenry.

“I strongly agree on d competitive advantage of Borno in the areas of arable land, age long agricultural prowess and practices and visionary leadership that hold the key to agricultural revolution in north east and Nigeria at large”, Fantami said.

He also urged the Borno citizens to be committed and supportive to their Governor whom he described as a non-arrogant and optimistic leader who lives by exemplary leadership style and carries all everyone on board despite the challenges and threats.

She also commended the Governor for such initiative and pledged to support the state to achieve its desired goals in the interest of her citizens which in line with the national development plan and goals.

Represented by the Permanent Secretary, Federal Ministry of Finance, Alhaji Aliyu Shinkafi, the minister further reiterated the willingness and determination of the federal government to work with the state government to achieve full implementation of the 25 years development plan.

Sen. Kashim Shettima, representing Borno Central senatorial District at the National Assembly who is also the immediate past State Governor, commended the efforts and commitments of Governor Zulum.

He also applauded the doggedness and manner Governor Zulum has been governing the state improving on various infrastructural developments and touching the lives of the poor masses especially the IDPs untiringly across the state since he assumed office despite the daunting challenges of Boko Haram insurgents.

UN Humanitarian Coordinator in Nigeria, Edward Kallons commended the Governor for his initiative and efforts on the 25 years and assured him that UN will continue to work with the state government to ensure the successful Implementation and sustainability of the Development plan.

Represented by the UNICEF Country Representative, Mr. Peter Hawkins, the UN Humanitarian Coordinator noted that already UN has been collaborating with the state government in Sustainable Development of the state and livelihoods of the IDPs.

The Shehu of Borno, HRH, Alhaji Abubakar Garbai Ibn Umar El Kanemi called on local and foreign investors to invest in the state to tap the available untapped oil, minerals and Agricultural potentials the state is endowed with.

In his vote of thanks, the Chief of Staff to Governor Zulum, Professor Isa Hussaini Marte thanked  all the dignitaries for honouring the invitation  while wishing everyone safe return back to their destinations.

He also assured that Borno state will raise up again and return to its lost glory successfully.
#