The hospital was built in 1976 with 48 bed capacity of 4  Wards to serve the entire north eastern part of Nigeria and the 3 neighbouring countries of Nigeria, Cameroon and Chad Republics.

The governor said the hospital was attacked by the book haram insurgents resulting to wanton destruction and vandalization of structures and equipment at the hospital as well as displacement of staff before they were reassigned to other hospitals to work. 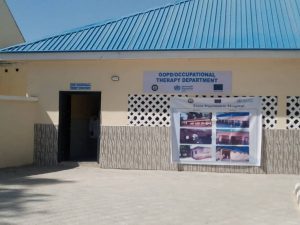 Represented by the Special Adviser to the Governor on Reconstruction, Rehabilitation and Resettlement (RRR) , Hon. Abdulrahman Abdilkareem, he said that with the modern and sophisticated facilities and equipment now provided as well as new look given to the structures at the hospital, the entire state, north east and neighbouring countries of Niger, Chad and Cameron Republics will definitely benefit immensely from the new structures and equipment provided by WHO at the hospital.

While commissioning the Psychiatric Hospital, Governor Zulum also appreciated the efforts and support of the WHO, Development Partners and all those that contributed in the rehabilitation and reconstruction process of the hospital.

The Chief Medical Director (CMD), Borno State Hospital Management Board (HMB), Professor Mohammed Arab  Alhaji in his remark, thanked WHO and other Development Partners, disclosing that the hospital has been managed for over 35 years and were underway to engage the services of the Federal Neuro-Psychiatric Hospital Pomoomari Bye Maiduguri to head the new edifice and render better services .

He assured that the facility will be properly maintained and put into use adequately with the 48 bed capacity now in place at the 4 wards of the hospital. 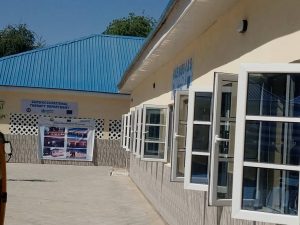 Earlier, the WHO Health Focal Officer, RR. Henry Nwanja noted that since 2019 WHO has decided to start renovation work at the hospital when the state government approached WHO to assist facilitate the reconstruction, equipping and restoration of healthcare services to the hospital.

Dr. Henry further explained that due to the significance of the hospital and services it renders, the Federal Neurons Psychiatric Hospital Maiduguri has been over stretched  which informed the response and intervention of WHO to reconstruct and rehabilitate the hospital to complement the supporting services in the entire north east clinical management  referral mental health cases from various communities and Primary Health t facilities through the Mental Health Gap  Action Program  (MHGAP).

He added that to enable the PHC workers commence treatment of patients with mental health disorders, 26 selected PHC facilities in 24 LGAs of Born on state were supported with psychiatric drugs , MHGAP Registers, Weekly mental health state reporting tool and hand cards  and have treated so far, a total of 298 patients by the trained PHC  workers.

The WHO Health Focal Officer said similarly, WHO Support Mental Healthcare Outreaches being   conducted in health facilities across the host communities and IDP Camps by Mental Health Nurses from the State   and federal Neurons Psychiatric Hospitals where in 2019, the team treated 24, 190 patients with MHO and referred 405 for further management at Tue FNPH Maiduguri while I’m 2020, from January 2020, about 31 301 patients were treated and 12 referred for further management.