American veteran tennis player, Venus Williams said she will not play again this year after losing 6-4 6-4 in the first round of the French Open to Slovakia’s Anna Karolina Schmiedlova on Sunday.

The 40-year-old, playing in her 87th Grand Slam, fought hard but ultimately could find no way past her younger opponent as she suffered a third straight first-round loss at Roland Garros.

Having also lost in the opening round in Rome, it has been a lean time for the seven-times Grand Slam champion.

“I’m going home from here. I’m done. If there is somewhere to play, I won’t be there,” Williams told reporters.

With her ranking down at 76th — the lowest it has been since 2012 — the inevitable questions are being asked as to how long she will continue her career.

The way she fought against Schmiedlova for more than two hours on a blustery and damp claycourt, however, did not look like a player ready to hang up her racket.

She saved two match points after fighting back from 4-1 down in the second set but fell short.

“Even on my really good shots she had a lot of amazing replies that just kind of came out of nowhere. Give her credit to playing an amazing match,” Williams, runner-up at Roland Garros in 2002, said.

Asked if she would be back next year, she said she “definitely” would be although she said a 2020 hit by the COVID-19 pandemic had been a tough one.

“It’s been a very long year of quarantine,” the American said. “Now I’ll get to rest. So I’m looking forward to that.”

Schmiedlova, who ended a run of 12 successive first-round defeats at Grand Slams, said she hoped Williams would be back competing in 2021.

“I still hope that this won’t be the end for her, I respect her a lot. She’s had an incredible career and is still playing really good,” she said.

“But there are so many good young players now in women’s tennis and you can lose to the one ranked 300 or 100 and it’s getting more difficult.

“She already has made an amazing career and I hope that it won’t be her last match.” 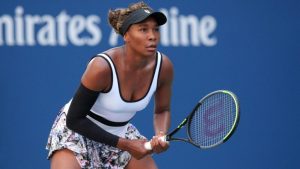