NERI has also handed over another, new 20 blocks of new toilets and bathrooms at GGSS Maiduguri as well as 30 blocks of rehabilitated showers and toilets at GGSS Yerwa; along with cleaning and sanitary materials including 10 waste bins, 5 hand-washing stations, 30 brooms, 30 buckets, 30 industrial parkers, 30 hand gloves, 30 brushes, 30 Metal mops/ buckets and a bag of 1 kg detergents. 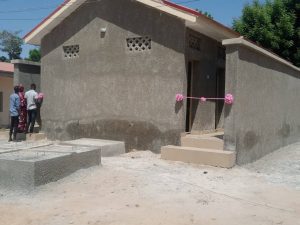 NERI has also rehabilitated and equipped the libraries by providing reading table and chairs, book shelves, catalogue boxes, recent version of text books for all subjects for both junior and senior secondary, to enable the girls have a conducive and comfortable space to improve their learning.

NERI also piloted a book club activity for 100 high school girls’ between the ages of 15 and 18 in Maiduguri. The participants were rewarded with fiction and non-fiction books that tell inspiring stories of young women leaders.

The book clubs later held a debate on topics related to education and the girl child. This activity gave the girl opportunity to express themselves, thereby boosting their confidence. 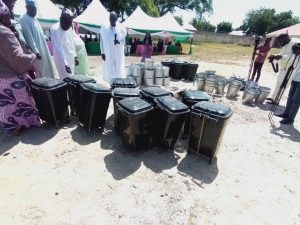 Unveiling  some of the projects at the GGC Maiduguri Tuesday, the Borno State Commissioner of Education, Hon. Bello Ayuba commended NERI for their support and assistance to the education sector of the state in many aspects executing numerous projects for the pupils and students.

Represented by the Secretary of the ministry, Alhaji Abubakar Sadiq Kadaffur, he expressed gratitude and appreciation for the honest execution of intervention projects,  which will impact on the lives of the younger generation and  our future leaders .

The NERI Program Manager, Mss Rukaiya Jibrin  in her opening speech said NERI has carried out construction and Rehabilitation of modern bathrooms/showers and toilets  in three girls high schools in Maiduguri.

She noted that as a result of the Boko haram insurgency, the 3 girls’ high schools in Maiduguri experienced an increase in the number of student population as the girls in other vulnerable schools across the State were relocated to the girls’ high school Maiduguri the capital.

“This exacerbated the already precarious situation of the Water, Sanitation and Hygiene (WASH) facilities in these schools as they became overstretched and were incapable of meeting the needs of the students as a major cause of concern to the Principals of the schools and the State Ministry of Education  who reached out to NERI for assistance.

“In this regard, NERI supported the 3 girls’ schools with shower and toilet facilities. In addition, we also provided essential cleaning and sanitary materials to ensure proper maintenance of the facilities.

“Over the years, NERI has worked with strong collaboration with the Borno State Government through partnering with several Ministries and the Local Government councils across the state to provide numerous supports to the people of Borno state particularly the Women and girls in strengthening their Voices and empowerment.
With the good relationship that was built prior to this time

“NERI supported the Girls inter secondary school sports competition under an In-Kind Grant, procuring sport equipment that was used for football (soccer) and basketball tournament. Some of the equipment and items includes jerseys, stockings, football, basketball, trophies, medals among others.

“NERI also observed the non-functionality and dilapidation of the three girl’s school’s Libraries, which lacked sufficient books and which are obsolete, to enable the Girls’ study”, Rukaiya said.