President Muhammadu Buhari has commended the resilience, conduct and calmness of Borno youths for not joining #EndSARS protests that paved way for hoodlums to engage in violence, looting, killings and destructions of public and private property nationwide.

The President gave the commendation through the Minister of State for Agriculture, Hon. Mustapha Baba Shehuri, on Wednesday during a peace and harmony stakeholders meeting of all the Borno State Stakeholders held at the Multi purpose hall of the Government House Maiduguri.

He also acknowledged and commended the doggedness, commitment, dedication, determination and leadership style of Governor Babagama Umara Zulum of Borno State for his untiring efforts in providing the security and welfare of the citizens of his state, especially, the Internally Displaced Persons (IDPs).

The president also appreciated Borno Elders and traditional rulers as well as other stakeholders for their roles in the maintenance of peace and promotion of peaceful co-existence among all religious, ethnic, regional and political divide across the state. 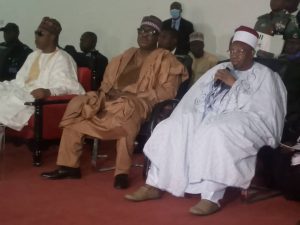 The president commended the governor’s support in the fight against Boko Haram insurgency, provision of humanitarian services to the IDPs, resettlement of the displaced persons, construction and Rehabilitation of houses, roads, schools, vocational training centers and hospitals in the state.

In his personal remarks, the Minister said, “In fact, everybody is proud of Borno Governor for what is doing in the state. Even myself, as an indigene of the state, I am proud of the governor’s commitment to good governance by ensuring that COVID-19 palliatives and other relief items were distributed to the people across the state, especially, IDPs where he has personally been seen distributing food items and cash to the IDPs in villages.

In a remark, the Shehu of Borno, HRH, Alhaji Abubakar Garbai Ibn El Kanemi, recalled that Borno, the home of peace for centuries, has become traumatised insurgency, brought into the state by outsiders and enemies of the state.

He expressed delight with the call for the stakeholders meeting which explained why he decided to come along with about 60 District Heads to participate in the important discussions. He later commended the youths for not participating in the violent protest carried in some parts of the country. 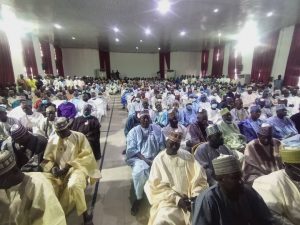 The royal father noted that Borno state is backward in education and internally generated revenue, which could have been used to provide basic infrastructures. He called on all stakeholders to guide their children and ensure they are enrolled in school.
The Shehu of Borno called on the Federal Government to return to oil exploration in the Lake Chad Basin.

In his remarks, Governor Zulum reassured his government’s commitment to good governance, provision of adequate security and welfare to the people while commending Borno youths for their restraint during the nation wide youths protest, stressing that, his Government will not tolerate any act of lawlessness and wanto destruction of property by anybody.

Zulum called on the people to be calm and continue their normal businesses as security agencies have been directed to deal decisively with any breach of public disorder by any person or group.

The governor however said intelligence report indicated that some elements are  planning to mobilise the youths to protest against the military while directives have been given to the security agents  to investigate the allegations for  prompt and appropriate action to deal with the culprits.