President Muhammadu Buhari has been called upon to fulfill his election Campaign promises made to the 500,000 N-Power  batch “A” and batch “B”beneficiaries who have recently been laid off by the federal government across the country .

National  Coordinator, N-power Youths Congress (NYC), Comrade Joseph Enam Magar, demanded for the payment or offsetting of their outstanding allowances of N30, 000 for Batch “A” since June 2016 and Batch “B” since July 2019; being 4 and 2 years respectively.

Addressing Journalists at a press briefing Saturday held at the NUJ Press Center Maiduguri, Mr. Joseph added that Federal Government should reconsider their plight as Nigerian citizens and law abiding youths who are energetic and hard-working towards national development having contributed to the education sector.

“We are hereby once again reminding the government of their promises to us and that we will never relent until federal government fulfill its promises. The State Representatives of N-power Beneficiaries have earlier stated our demands on the previous Press Conference and here we are reinstating the demands again.

“The Batches A and B of N-power Beneficiaries whom according to the Minister of Humanitarian Affairs and Disaster Management were disengaged since the month of June and July respectively are not happy for being sent back to the streets.

“We were struggling in different spheres of life to make a living. We were meant to quit the things we were doing before to embrace Npower with the promise of being absolved into the Federal Government scheme at the end of the day. 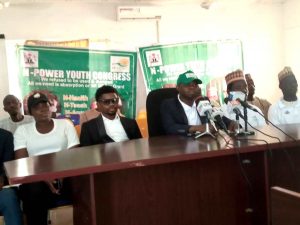 “We were made to serve our fatherland with a token of 30,000. Most of us have families with children, paying of school fees, electricity bills, water, transportation, feeding and other miscellaneous expenses on the grace of 30,000.

“How much is a bag of rice, ground nut oil, etc if I may ask? Some of us have siblings and sick parents whose hopes are attached to the same 30,000.

“To worsen it all, the same 30,000 will not be paid as at when due. Funny enough, our government under the control of Sadiya Farouk, the Ministers of Humanitarian Affairs and Disaster Management want us to save from the 30,000.

He added that,” we can recall that before the 2019 Presidential Election, we were made to understand by Mr. Afolabi that our voter’s cards determine our permanency. ”

“We mobilized ourselves, came out in mass to support this government. We spent our money going to Abuja for the campaign so as to ensure that President Muhammadu Buhari regains his office as the president of Nigeria. Npower beneficiaries in various states and Local Governments were equally forced by their focal persons to come out in mass during APC campaign.

“So many states even took attendance and beneficiaries that didn’t show up were penalized. All these were geared towards ensuring that President Muhammadu Buhari excel as the president so that the promises of absorption that was made through Mr. Afolabi will be fulfilled.

“But at the end, our hopes were truncated as we have been pushed back to the streets without absorption or an exit package. We hereby call on the President to please fulfill your promises. Absorb those that want to work as Federal Government Staff and give substantial reasonable exit package to those who would like to venture into businesses and other entrepreneurial enterprises.

“It is a fact that thousands of beneficiaries have not been paid since the month of March.

“Promises upon promises have been made on this, but yet no positive result has been recorded. Sometimes I wonder what it takes for the data base manager of Npower to rectify this! Something that can be rectified in a couple of hours has lasted for seven good months now.

“Worst still, this is happening within this period of hunger and starvation because of Pandemic. We call on the minister of Humanitarian Affairs and Disaster Management to be human enough to respond to our requests and give prompt attention to them.

“We equally wish to bring to the notice of Mr. President that Batch B Beneficiaries have not gotten their devices as was promised and signed at the commencement of the programme.

“It is very sad that up to the disengagement of Batch A and B, nobody has come out openly to tell us what happened to our devices. Why are the youths being treated like nobody in this country? What have we done to be neglected like this?

“Then comes the question: why did Batch A stay 4 years? And if we signed for two years contract that warranted our disengagement, didn’t we equally sign to be given a device that would help us in our different places of primary assignment and equally increase of knowledge? Please we need answers ma. We need answers.

“We, the 500,000 batches A and B of Npower beneficiaries are calling on our government to respond to our demand. We don’t want to believe that it’s only a state of violence anarchy and doom will make a sane government to listen to her Youth’s grievances.

“Look at the Endsars protest for instance, after many lives have been lost and properties destroyed, our government decided to speak up. Niger Delta militants were attended to when they resorted to arms.

“We want Mr. President to understand that a hungry man is an angry man. We have really endured a lot. We need a quick response to our requests. We can’t be used and dumped like refuse. We refused to be used and dumped”, the National Coordinator added.

Buhari’s Initiatives for the Youths